Creativity is an important part of life, and I think also, mental health.  This page provides a sampling of music and other media I have created as examples of how creativity helps me enjoy my life and maintain my own mental health. In creativity, I try my best to put aside my fear of the “blank canvas” (where to begin) and just… begin.

A few months ago, I purchased a very detailed and rich set of beautifully sampled orchestral string sounds (the company is called Spitfire Audio).  I decided to experiment with the sounds by going back to a harmony and bass line I had used many years ago when first “composing” music. Back then I had a very basic synthesizer with limited acoustic capabilities, in part because I was young and poor with student loans and because the technology made almost anything that sounded realistic near impossible. So, here is the result.

I had to stay home sick last week for a day, while recovering from a pretty bad cold.  Part of that time, I worked on a musical piece to capture my feeling of both fatigue and boredom.  The intent was to capture my attitude of letting the cold work its way through my body, so I could recover more quickly.  The piece is called “An unintentional downward spiral.”

Below is the proof of an  art piece I’ve commissioned from a local artist (Darren Terpstra)–someone I bought a really nice piece from earlier in 2016 at the Art-A-Whirl event.  The proof is based on a photograph I took of a cedar tree in the forest behind my cabin.  The words you see are from a prose poem I wrote shortly after buying the cabin about five years ago.  Darren played around with the image, and added some color and chose the font. He will now use something called an “Encaustic” technique using wax overlays to modify the image.  I plan to hang the image in my office when it is complete. I have tentative called the piece “These Cedars Speak to Me.” 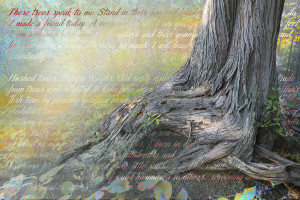 The following musical composition is called “Differentiation,” which is taken from a family therapy concept that describes the process of creating a separate sense of identity and self in the context of being in a close relationship (for example parent-child or a partnership relationship). While composing the piece I imagined two people lost in a forest trying to find each other without losing their own sense of space.

Here is another composition, called PrairieLand, which I thought about while driving from here to Springfield IL back when I practiced law.  I had a number of clients there and it was cheaper and not much longer to drive than to fly.  I had a lot of time to think while driving past the cornfields and the woods on the highway.

As part of my foray into sound creation, which sometimes ends up becoming a piece of “music” (some might call that a stretch), I have been learning how to use a new instrument I purchased, which is a music workstation keyboard called the Kronos (love the name and all it can do).  The following pieces are the results of what I have learned so far. Some of these pieces are pretty experimental (meaning strange or unfinished) but part of the idea I am trying to convey is to lose the fear of the “blank canvas,” which means not being afraid of what you don’t know, so you can let your creativity flow.

This piece still has it’s original name, which is Kontakt-Arp-Animated-Multistrings, which tells me it is something I created in a sample-based software program called Kontakt, I am using an arpeggiator as part of the movement of keys, and I have animated the sample as well to give it some extra movement.

Below is a piece called “Arp-Flute-Maelstrom,” which might be my longest piece so far (so beware of load time and data size). It is over 15 minutes long.  This is a flute-based piece in which I took two movements and juxtaposed them by layering one on top of the others. Getting the timing right was tough!